Construction has now started on the new five-screen Everyman cinema in Cardiff Bay. The fast-growing independent boutique cinema operator is to open its first Welsh cinema at Mermaid Quay later this year.

Workmen are now on site busy erecting scaffolding on the east side of Mermaid Quay, overlooking Roald Dahl Plass, so that the first phase of work can start. This phase is being undertaken by Mermaid Quay’s contractors Knox & Wells, and involves preparing the site for Everyman.

Property consultancy JLL in Cardiff is project managing Phase 1, which will be completed this Summer, when the space will be handed over to Everyman for its fit out ahead of an opening towards the end of the year.

Everyman cinemas has 26 other discerning venues in England including London’s Screen on the Green as well as one in Scotland (Glasgow). The new high-quality cinema at Mermaid Quay will be made up of five intimate auditoriums.

Crispin Lilly CEO of Everyman cinemas said: “We genuinely can’t wait to open for business in Mermaid Quay. It’s our first Welsh venue and we think there’s a great community in Cardiff and an audience that will really enjoy spending the evening with us.

Our focus is really on experience, from a fabulous bar and food and drink menu, including lovely wines and hand rolled pizzas, to comfy sofa seating and a great programme of film and events. We aim to make every guest’s visit special no matter what they choose to watch, and make them fall in love with a night at the cinema.” 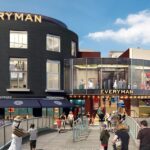